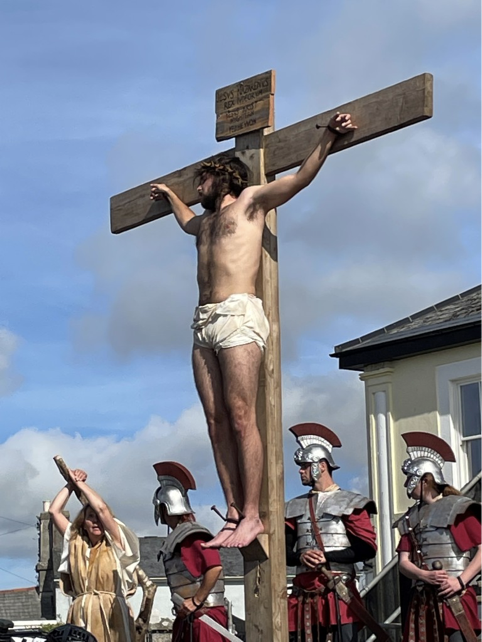 The crucifixion (Jordan Scrase as Jesus)

After the final performance of The Passion (the middle of three plays in the St Just Ordinalia) on September 17th, 2021, in a small Cornish town close to Land’s End, producer Mary Ann Bloomfield thanked the company, exalting in the fact that ‘…ordinary people can create such extraordinary things’. Having also played mistress of ceremonies character, ‘Ordinary’, her use of this quotidian word perhaps resonated playfully with a sated audience in St Just’s open air Plen an Gwari (‘playing place’) because, for sure, there was absolutely nothing ‘ordinary’ here.

In spite of a close connection with West Penwith – the tip-end of Cornwall – including directing and producing many years of Central student productions at the Minack Theatre and holidaying there at least twice a year, I can only ever be a visitor to the area, an outsider from ‘up-country’. This slice of commentary on a major community event is that, therefore: a brief, personal, sporadic glance at a moment of theatre, in place and time. St Just’s Ordinalia, 2021, and its associated exhibition and lectures is worth much more.

The remarkable, circular Plen an Gwari in St Just is the oldest open air, working theatre site in Britain and the St Just Ordinalia trilogy (roughly, the Creation, the Passion and the Resurrection) is our oldest surviving trilogy of plays (14th century). Perhaps not as famous as the York Mystery Cycle, its deep locality was manifest in the 2021 version – only the second production in over 300 years – with comedic moments aimed at nearby villages, participation by 237 local volunteers, Doubting Thomas speaking entirely in (the original) Cornish, and the Mouth of Hell ‘mission’ inspirationally staged as a daunting Cornish mine entrance. Yet this theatre mattered to outsiders in the audience as much as locals, I suspect.

I offer two points to support this. First, this was a successful, major community event that could not fail to arouse intense admiration and not a little envy from any outsider. Corralling so many performers across three plays, creating a rounded set of missions (e.g. for each of Pilate, Herod and Caiaphas) and a mainstage with Heaven above, re-envisioning yet retaining this medieval trilogy … this was a majestic feat of theatre. (As was raising over a quarter of a million pounds in funding, one might add.) Imperfections were overridden by (wrongly unexpected) moments of excellence in performance (including a magnificent score and choir). Overhearing a programme seller speaking to friends in the audience that she ‘just couldn’t not be involved, somehow’ made complete sense. I, too, wanted to be part of such an enterprise and, as an outsider looking in, envied participation in this powerful creative communality, particularly after lengthy periods of personal isolation.

Segueing and second, this was live, safe, large-scale theatre after a prolonged, agonising drought. Trickles of filmed theatre on home screens from our best national creative teams and praiseworthy digital experiments were forgotten as we revelled in spectacle and vitality, readily turning to watch a crucifix paraded, or Pilate deny responsibility, or quickly leaning back as a Satan-on-blades passed close. Quietly in the programme a rehearsal venue list was given: St Just Miners’ Chapel; The Nancherrow Centre; the Drill Hall; The Knut (a ‘backstage’ space for the Plen and named after Dominic Knutton – artistic director of the 2000-2004 Ordinalia, the first performance for over 300 years). Albeit 6 years in development for this 2021 follow-up, it was hard to believe such these rehearsals were achieved during pandemic lockdowns and masking. (St Just is thankfully tough on masking, too.) More admiration – and gratitude – for this live(li)ness and sweeping immersion contrived through such socially pared times. When Judas kissed Jesus in Gethsemane, I wasn’t sure if my emotional response was at a betrayal movingly performed or a real-world, sudden jealousy of such nearly-forgotten intimacy. A salutary resonance of timing was only enhanced by the penultimate words of a female God ‘The earth cries out … Nothing will ever be the same again’ as we fervently hope for some things to be, in fact, the same again.

St Just’s Ordinalia was a hugely welcome reminder of the importance, joy and mattering of live, community theatre. It was, indeed, extraordinary for this particular visitor who left with admiration, envy – and gratitude in her heart, whilst simultaneously regretting only seeing one-third of the trilogy.

The full weblog, with the author's photos, can be accessed here