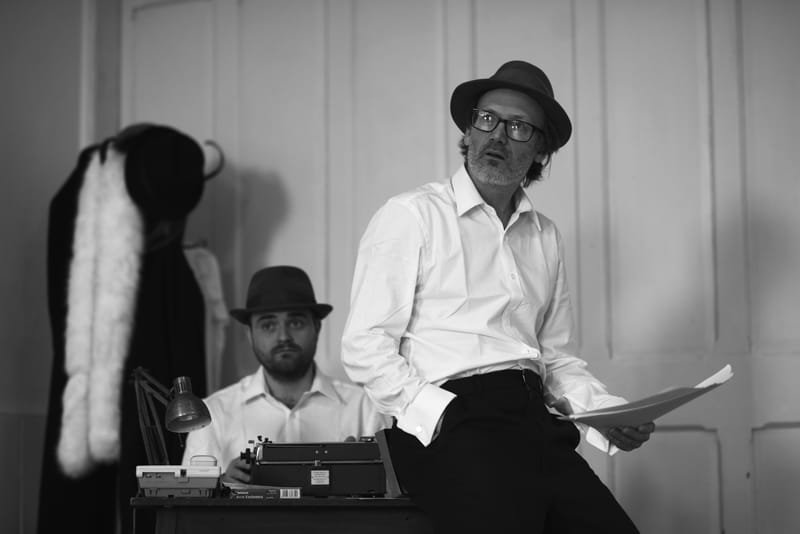 How tempting to write 'An Introduction to the ‘St Just Ordinalia' instead.  To create an ownership of a story, a place, an epic event.  To say 'This has been performed for centuries in St Just, in our Plen-an-Gwari.  We have continued the tradition, in the years 2000-2004, and again in 2021, and we will to continue to do it over and over again to maintain this tradition.’   The Ordinalia is a story performed, and handed down, by our ancestors; biblical, spectacular, told in countries all over the world for at least several thousand years in all manner of open air and indoor settings, continually being adapted to suit the people, the landscape, the culture, the customs and fashions of the day,

The Ordinalia is how our Cornish ancestors envisioned, wrote and performed their version of the Bible, from the beginning of the world to the Ascension of Christ. It is made up of three plays, regarded as possibly the oldest trilogy of plays in Britain and thought to have been written in the late 14th century. Written in Cornwall by the clerics of Glasney College in Penryn, near Falmouth, at a time when the Catholic faith was the dominant religion and Norman influence and power was still keenly felt. The Ordinalia is a play manuscript and there are only a few copies in existence. That these manuscripts have survived at all is both a miracle and a mystery, but these few play texts have such a deep sense of connection to our past that writers, scholars, linguists, and theatre companies are still being continually drawn to them.

A huge amount has been written about the Ordinalia, by people much more learned than myself, so it really makes sense to discuss the plays from a personal perspective rather than from an academic point of view. To write from my experience gained working on these plays practically. A great deal of my thoughts are speculative and what I love about the Ordinalia is that if you speak to those who study it, everyone seems to have a bit of the jigsaw that they can bring to the table and throws light on what it appears to be. I write as a director, as an actor and as someone who has studied it a bit with a view to performance.

That said, here are a few things that I do think are important. The Ordinalia was performed in a Plen-an-Gwari – meaning in Cornish, the place of the play. A circular amphitheatre with raised earth banks, with mansions (small structures or houses) constructed at intervals on the banks, positioned - or rather orientated - often in line with how a medieval church is aligned. For example, Heaven would have been positioned in the East and Hell in the North. It is quite a thing for an actor to realise that they are often playing within a few feet of where actors would have stood over 600 years ago, facing in the same direction, and speaking the same words to the same characters.

There is a central playing area but it is likely this was not raised, and could be for staging larger biblical scenes such as Noah's Ark or Moses crossing the Red Sea. There were Plenys-an-Gwari all over Cornwall in Medieval times, although now only two complete sites remain as places of performance and play. It is likely that they weren't just used for plays such as the Ordinalia, but for all manner of sport, games and feasting, and can easily fit a community of a thousand people within it's confines, including those passing pilgrims who were drawn to Cornwall to visit holy places, shrines and oratories, or were travelling through from Ireland and on to Brittany.

One of the most remarkable features is how these plays are designed to be staged, which affects the playing style and conventions. With the mansions around the outside of the Plen and the central playing space it means there is no waiting for scenes to be changed – the action is flowing, continuous, and one scene can overlap another. This makes it quite different to the huge, spectacular productions of Mystery Plays on the Continent, such as the Oberammergau Passion Plays, which require the audience to wait for several minutes whilst the next epic scene is being constructed.

To my knowledge there is no real connection to the York and other Guild plays in the North of England. These mystery (or 'mastery' of your particular craft or trade) plays had pageant wagons lining the streets, with particular parts of the Bible acted out on each one – with the Fishmonger's guild performing ‘Noah’s Ark' or the Carpenter's guild in charge of the Crucifixion, for example. There surely must have been some guild involvement in Cornwall during the Middle Ages, but the Ordinalia sheds no light on such similarity.

In the St Just production all the actors are from the local community, and the wider Cornish community. All are welcome, none are paid, and no one is directly associated with the Church. That is to say, it is not a production put on by the Church as it would have been in Medieval times, and in recent times is not generally performed to correspond with a Feast or Holy day. How likely is it that only monks and priests were allowed to perform in these plays all those years ago? Much more likely that they were the producers and directors, overseeing the local community to bring Christianity to the illiterate, to connect with the community over a shared story, and to serve as a stern all be it entertaining reminder to attend Church, be good and to pay your tithes. It is also probable that the relationship between the Church and the community had no clear boundary. When religion is so intertwined with daily life, often culture and custom are one and the same. The community would serve God and the Church in some way, even if you lived outside the environs of the Church walls.

If the community were involved, then who were these actors? Is it probable that the most important person within the local community in the 1400's had the best role? You wouldn't give the role of God to young Tom, the cobbler's apprentice surely. Wouldn't it be more seemly that God be played by the equivalent of a mayor or burgomaster type figure perhaps? High status, respectable. Who would want to play or be brave enough to play Lucifer? Someone cheeky and likeable – or someone that the whole community is happy to shout at and jeer, who is equally happy being thought of as supremely evil for the rest of the year until next seasons production?

Some of these burdens must have been taken off the shoulders of the actors by the Ordinary – a person with a continual presence within the plays, much like a visible director, who can whisper forgotten lines in the actor's ear, point with a stick to where the action is about to begin, and give a short summary of who is parading before the audience's eyes and what scene is next.

No matter what century these plays have been performed in, there is a constant for both actor and audience. They both sit (or stand) within the round, and the story vividly unfolds as very much a shared experience, intimately or boldy told in the confines of this circular playing space. The world sits outside and for a short space of time the dramatic importance, the constant eternal part of what is being portrayed, takes precedence over all present material and physical worries. Both actor and audience venture into the world of the spiritual and divine, and therefore powerful and invisible forces come into play. We connect and gain a glimpse of our ancient world, which is only possible through the process of actually doing, experimenting and seeing what works and what doesn't on stage.

Within the story of the Ordinalia are hundreds of individual's stories from the people involved with the production. During the development, the funding, the rehearsal, the building and constructing phases, life very much exists outside the world of the Plen. Those who get involved have their own reasons for joining the production. It has and always must have been a voluntary effort. You can't force someone to act, to say lines with energy, passion, and focus. Many people will struggle with the story - the patriarchal characters, the submissiveness, the hate, violence and the oppressed, the unbending world view of our Medieval ancestors, the lack of diversity, the opinionated, the poverty and greed, and the powerful message of faith, etc. are all subject to much discussion and debate.

Making any theatre is a process and this film is the end product of a performance. It also stands as a testament that, even during difficult times, people still have faith and trust in each other, though the end product is often far off and unclear.

To begin to understand the theatricality of the Ordinalia, it helps to be part of it. Therefore, I hope that future generations continue to tell this story, and although it isn't solely a St Just play, perhaps one day there will be a greater recognition of what this community has achieved. I also hope that it will be supported to continue it's Ordinalia journey long in to the future.