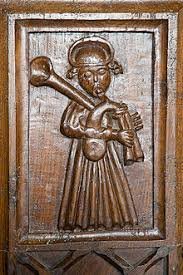 That headline quotation was taken from the Passio Domini play.

There is also a reference in the Cornish language to pipes in the Origo Mundi :

' In the name of the father, Minstrels of grace, pipe at once.'

You can see an example of Cornish pipes carved in the early sixteenth century on a bench end in Altarnun Church, Bodmin Moor. Other examples of carvings of Cornish pipes are in churches at nearby Davidstow, St Austell and Braddock.