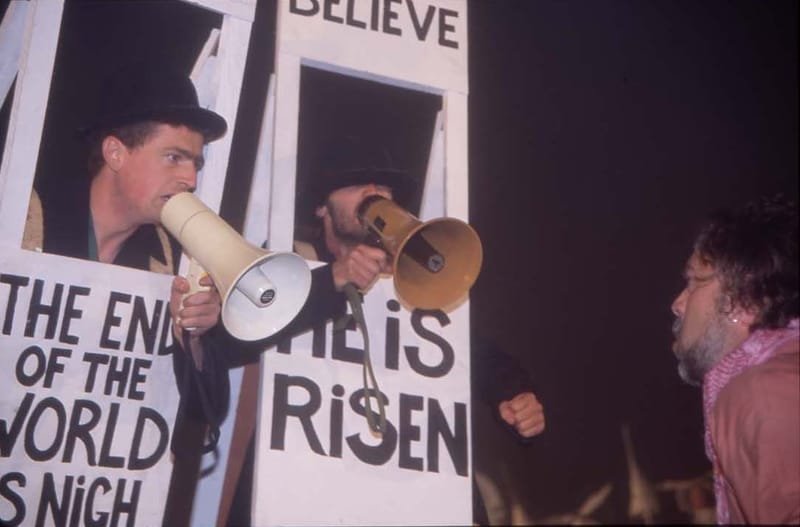 Each generation throughout the ages has had to deal with its own set of unique histories impacting on the lives of its citizens - wars, pestilence, famine, natural disaster, rebellion, political rivalry, division.

The narrative of the bible stories is relevant to each era, and still relevant to our own.

Origo Mundi - Epic, biblical stories on a spectacular scale. Lucifer has fallen and Adam and Eve expelled from Paradise. It's a long road back to redemption and the fulfilment of the prophecy. Three pips from the Guardian of the Gates are all that's needed. The Legend of the Rood has begun.

The Passion - St Just's colourful characters tell the story of Christ's final week leading up to his Crucifixion. What should be a time of celebration for Passover instead finds Jesus preparing his disciples for his imminent death, as he awaits betrayal, accusations and torture, knowing there is no escaping his destiny. Meanwhile Lucifer realises he has gone too far and the final battle awaits. Deeply moving and poignant amid beautiful storytelling.

The Resurrection - The Shepherd has been smitten and the sheep are dispersed. Angels and Devils fight for supremacy, the spirit of Christ has risen and Hell is harrowed on a spectacular scale. Within the disciples there is a crisis of faith, and Lucifer has one more trick up his sleeve. We conclude the story, with much bawdy humour at the expense of Pilate along the way, leading to the climax of the Ascension. The trilogy is complete.